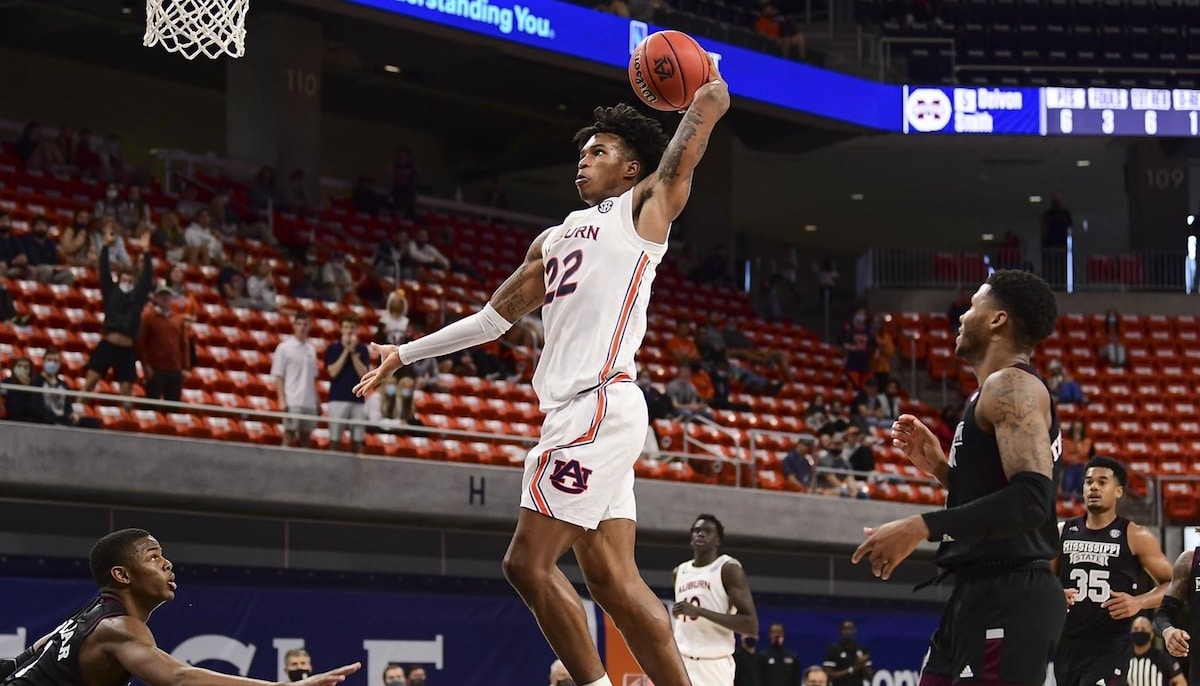 Allen Flanigan, who plays the guard position for the Auburn Tigers basketball team, is partnering with Hydra-Guard. In a statement on Twitter, Flanigan announced the switch to Hydra-Guard in a new partnership, stating that they will “keep me properly hydrated this season.”

Flanigan is entering his junior year with the Tigers for the upcoming 2021-22 season. Flanigan was a key member of the Auburn basketball team last season, averaging 14.3 points per game while starting all 27 games played last year. That was a big jump from his freshman season, where Flanigan started only three games and averaged just over three points per game.

Hydra-Guard is a sports drink company founded in Louisiana. It is known as a “premium sports drink” that contains only natural flavors and simple ingredients. According to their website, the sports drink is formulated with five essential electrolytes, contains only five grams of sugar, and only has 30 calories per bottle. They also have a variety of flavors, which include Watermelon, Lemon-Lime, Lemonade, Grape, Orange, Strawberry Banana, Blueberry, and Fruit Punch.

Hydra-Guard is a relatively small company, for now, having around 11.6 thousand followers on Instagram but less than 120 followers on Twitter. However, Hydra-Guard does have some big-name athlete ambassadors according to their website. These athletes include Paul Millsap of the Denver Nuggets, Juwan Johnson, Ryan Ramczyk, and Terron Armstead of the New Orleans Saints, Alexander Mattison of the Minnesota Vikings, Cedrick Wilson Jr. of the Dallas Cowboys, and Jane Campbell of the Houston Dash.

Earlier this month, several state laws and NCAA rule changes were made to get rid of the rule that restricted NCAA athletes from selling the rights to their name, image, and likeness (NIL). With the new changes, athletes are now able to make money off of their publicity while at college, which was not allowed before this rule change, as student-athletes would have to give up the right to sell their NIL when they signed the scholarship agreements.

Since July 1st when the new rule came into effect, we have already seen some high-profile college athletes take advantage of profiting off of their name, image, and likeness. Some of those athletes include Alabama quarterback Bryce Young and his partnership with Cash App, Clemson, and North Carolina quarterbacks D.J. Uiagalelei and Sam Howell’s deal to be endorsers for Bojangles, and Auburn quarterback Bo Nix’s sponsorship deal with Milo’s Sweet Tea.

The most surprising part of this partnership between Allen Flanigan and Hydra-Guard is that Auburn basketball already has a deal with Gatorade, which is a competitor of Hydra-Guard. I believe we will see a lot more of this happening, and it makes sense since the players are not receiving anything for using or marketing Gatorade or other team-sponsored products.

The biggest thing to look out for is if Gatorade or other sponsors of university sports teams will be looking at these types of deals the players are making with rivals and see it as a reason to offer less to be a sponsor of a team, not sponsor the team at all, or even partnering with the student-athletes themselves.