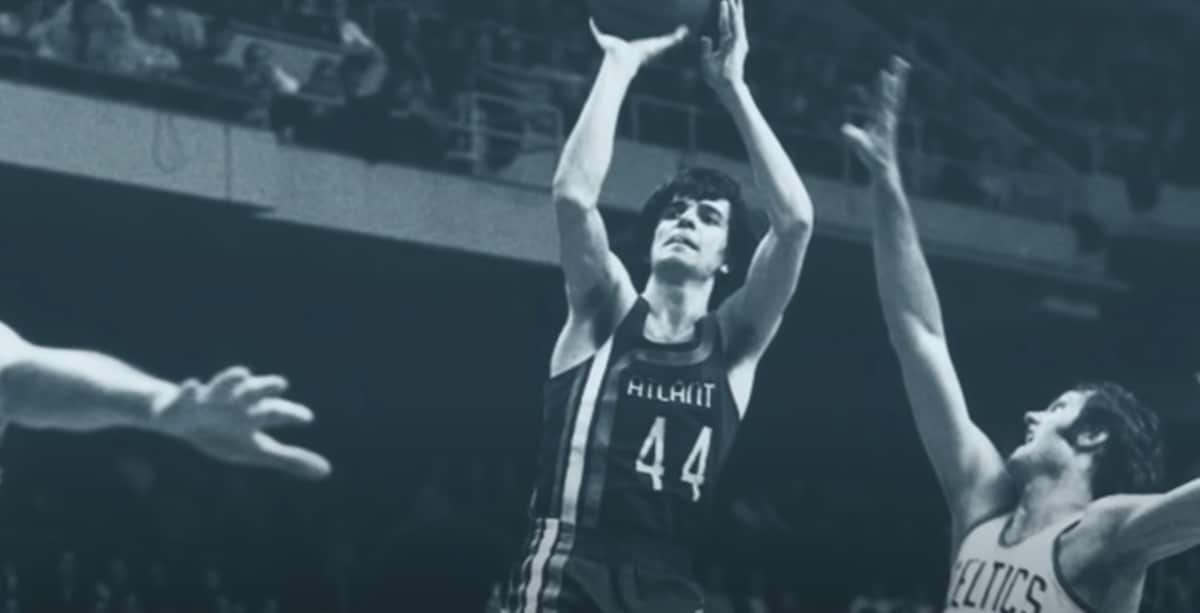 Pete Maravich was born on June 22nd, 1947, in Aliquippa, Pennsylvania. His father, Press Maravich, was a former player in the National Basketball League, where he played for the Youngstown Bears for one season before playing in the Basketball Association of America from 1946-47 for the Pittsburgh Ironmen. Pete’s father went on to have a long coaching career, spending time at many colleges which included Clemson, NC State, LSU, and Appalachian State.

Pete Maravich learned how to play basketball at a very young age with the help of his father, who taught him the main skills of the game at just seven years old. Maravich was obsessed with the game growing up, spending hours at a time practicing. Whether it was dribbling, passing, or shooting, Maravich would do it all.

Maravich ended up going to Daniel High School in South Carolina, where he spent two years there playing for the school’s basketball team. His father would end up getting a coaching job for NC State after his first two years at Daniel, so he and his family moved to North Carolina where Maravich would attend Needham B. Broughton High School. He graduated from the school in 1965, and then attended Edwards Military Institute.

He would go on to play at Southwood College during the 1965-66 season before going to college since Southwood was a prep school and not a college. During his time at the school, Maravich led the state in scoring by averaging more than 32 points per game.

Maravich decided to attend LSU, which happened to be the school his father was coaching at the time. With first-year college students prohibited from playing on the school’s varsity team, Maravich found himself playing for LSU’s freshman team. He dominated in that first season, averaging an incredible 43.6 points per game.

Once in his second year, where he was now eligible to play for the varsity team, Maravich showed why he was one of the greatest players in college. In that 1967-68 season, Maravich averaged 43.8 points per game, 7.5 rebounds, and 4.0 assists per game. The next highest leading scorer on the team was Rich Hickman, who averaged 13.2 points per game, which was 30 points less than Maravich. Maravich would go on to be named to the All-SEC 1st Team, consensus All-American 1st Team, and would be named SEC Player of the Year that season.

In his junior year, Maravich increased his points per game to 44.2 and was able to increase his assists from 4.0 per game to 4.9. Although his free throw percentage dropped, his field goal percentage rose by more than two percent, jumping from 42.3% to 44.4%. Unfortunately, Maravich’s incredible scoring records would not translate to wins, as LSU finished with a 13-13 record that season, good for 7th place in the SEC. Maravich would once again take home SEC Player of the Year, while also being named again to the 1st Team of both the All-SEC and consensus All-American. Maravich would also win the National Player of the Year for the first time.

During his final season with the Fighting Tigers, Maravich led the team to their best record during his time there, as they finished the season 22-10, which was good for second in the SEC. Maravich once again led the nation in scoring, averaging the highest point total of his college career at 44.5 points per game. Maravich would go on to win National Player of the Year for the second year in a row, while also being named to the All-SEC and consensus All-American 1st Team for the third consecutive year.

The LSU Fighting Tigers had a record of 49-33 during Maravich’s three years with the team. He still holds the Division I record for most points scored in a college career with 3,667 points.

Maravich holds a long list of records in NCAA Division I basketball history. Some of them include the most points scored in a single season (1,381 points), most 50+ point games in a single season (10 games), most field goals in a career (1,387 field goals), most consecutive 50+ point games (three games), first all-time in career scoring average (44.2 points per game), the top three highest-scoring averages in one season (44.5, 44.2, 43.8 points per game), and most 40+ point games in a career (56 games).

Pete Maravich was selected third overall by the Atlanta Hawks in the 1970 NBA Draft. He had a strong start to his career, averaging over 23 points per game in his rookie season, which was the ninth-best in the league that year and earned him a spot on the NBA All-Rookie 1st team.

Maravich would end up spending his first four seasons with the Hawks, helping them make the playoffs in those first three years. He was named an all-star in his third season in the NBA and was named an all-star again the following year. Maravich was traded during the 1974 offseason from the Hawks to the New Orleans Jazz, where he would spend the next five seasons.

During his time with the Jazz, he was named an all-star three consecutive years from 1976-1979 and had a career year in 1976 where he averaged 31.1 points per game. That 31.1 would end up being the best in the league that season, as he led the NBA in both points per game and total points. During the 1979-80 season, the New Orleans Jazz moved to Utah, and Maravich would play half the season with Utah before being waived by the team. He was then picked up by the Boston Celtics where he would spend the final 26 games of his NBA career.

In his 10 years playing in the NBA, Maravich would average 24.2 points per game, 5.4 assists, and 4.2 rebounds per game. He was named to the All-NBA team four times (two 1st teams, two 2nd teams), and his career 24.2 points per game is the 19th highest all-time in the NBA. His number 44 is retired by the Atlanta Hawks, while his number seven is retired by both the New Orleans Pelicans and Utah Jazz.